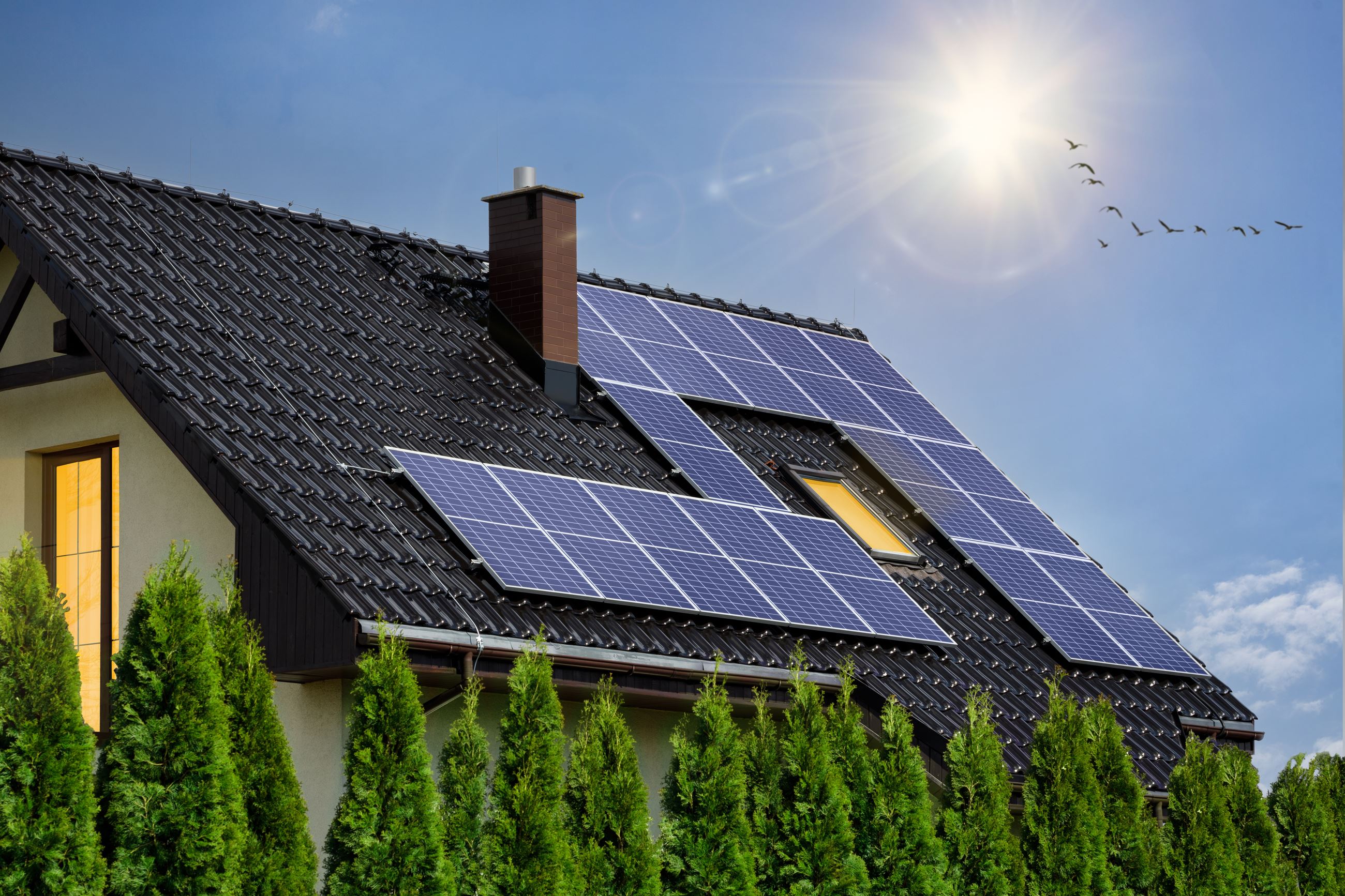 Madison has joined the US Department of Energy’s SolSmart program to help residents install and access solar energy. Our goal in SolSmart is to make it faster, easier, and more affordable for Madisonians to install solar energy systems.

Solar energy is growing in Madison. View the latest metrics for NJ here and for Madison at the tab at the end of this page. Then join the trend!

Start to learn about solar energy

Will solar work on your home?

The economics of solar energy

So you have decided to install a solar energy system; the tabs below will help you find your installer and follow the right process in Madison for doing your installation.

What is our objective? To do our part for New Jersey’s Energy Master Plan, Madison needs to have ~1,000 homes with solar systems by 2050; that requires that we average about 33 new systems each year. Today that rate is about 15.

Today (April 2022) these 85 solar PV systems have a combined power rating of ~850 kW. For systems like this in NJ we can assume that each kW of power will produce 1200 kWh of energy in an average year. Therefore, these systems are producing ~ 1 GWh of energy annually, a small fraction (less than 1%) of the 130 GWh consumed annually in Madison

Typically solar installations are paid for through loans or cash, with Federal and State incentives available, some guides include:

Every month you use your solar system, you will save money on your electric bill. These savings will eventually offset the cost of any system. The only difference is how long that will take. Typical options available from most installers include a direct purchase, a solar loan or a solar lease. If you chose to pay cash, you will typically have the fastest payback. If you chose another finance option, it will take a bit longer but you may not have to come up with any money up front

Direct Purchase: Purchasing your solar system outright results in the quickest payback of your investment through savings on your electric bill and NJ REC’s (Renewable Energy Credits). Not to mention Federal incentives that are available which increase your savings even more. These incentives change from time to time, so discuss these with your installer. During your install, most installers will take care of all this paperwork and make sure that you are receiving every discount and incentive possible.

Solar Loan: This is just like getting a loan for your car except for one thing: you typically don’t have to make any up-front payments. Your solar loan payments can be less than your electric bill was previously, achieving savings immediately. The solar loan is probably the most popular option with our customers because they get a solar energy system and utility bill savings without having to lay out any cash at all.

Solar Lease: With solar leasing, the amount you pay for energy is locked in at a fixed cost, regardless of what happens in the REC or energy market generally. Furthermore, since you don’t own the system, the leasing company is fully responsible for the costs of maintaining and fixing your system.

How Much will my Solar System Cost

The upfront cost of a solar energy system depends on the size of your system, the complexity of the roof installation, and your choice of solar panels. A reliable estimate of the cost of a system can only come from your installer. 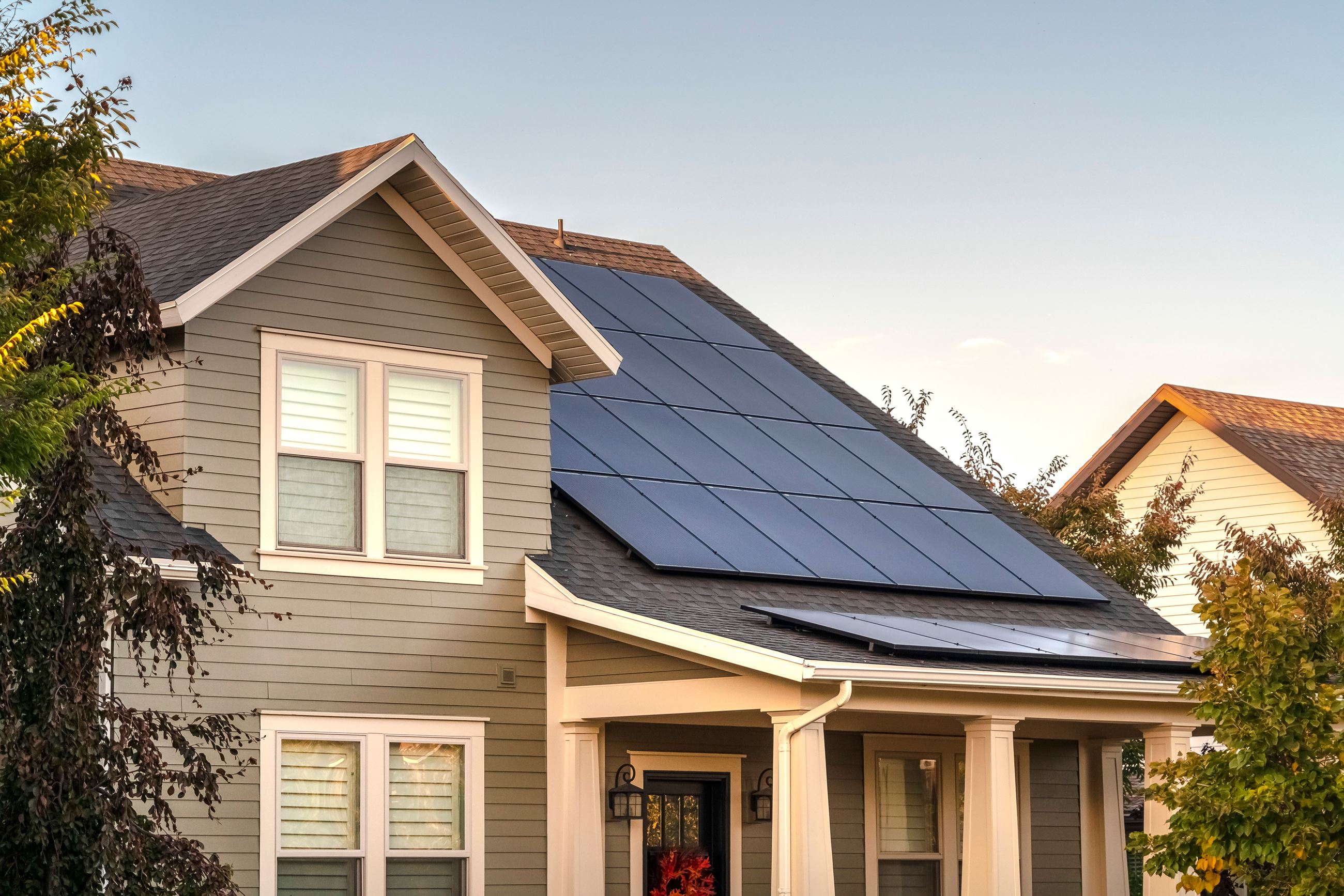 Solar photovoltaic (PV) systems in Madison are connected to the Madison Electric Utility. This connection provides two benefits: First, there will be times when you’ll need power from the electric system, like on a cloudy day or when there’s snow covering your solar panels. Second, at times when your PV system is generating more power than you need, the excess power flows into the electric system grid and earns you “energy credits” that will reduce future bills. This works through a process called “net metering.”

Get the Most Value from Your Credits

Annually, residents can decide whether to cash out their remaining solar energy credit as of March 31 or let the credit continue to accumulate and roll forward. The "cash out” will automatically occur when a credit reaches $750 and also when an account is closed. If you request a cash out, then the utility will use the actual cost the Borough paid for electricity to determine the value of the credits you have accumulated. This rate does not include system charges, capital and operating expenses.  So, you will get the most value from energy credits if you use them during the year to reduce your bill. “

The Madison Electric Utility only records customer’s interaction with the Madison Electric grid. That is, the energy that your solar panels produce but is consumed for your own home needs is not recorded. Only your solar contractor or your system can provide solar production reports.  The only way to know how much total electricity you have consumed in your house is to add up the solar production from the contractor with the electricity purchased from the Borough. An example is provided below.

A Sample Bill including Solar 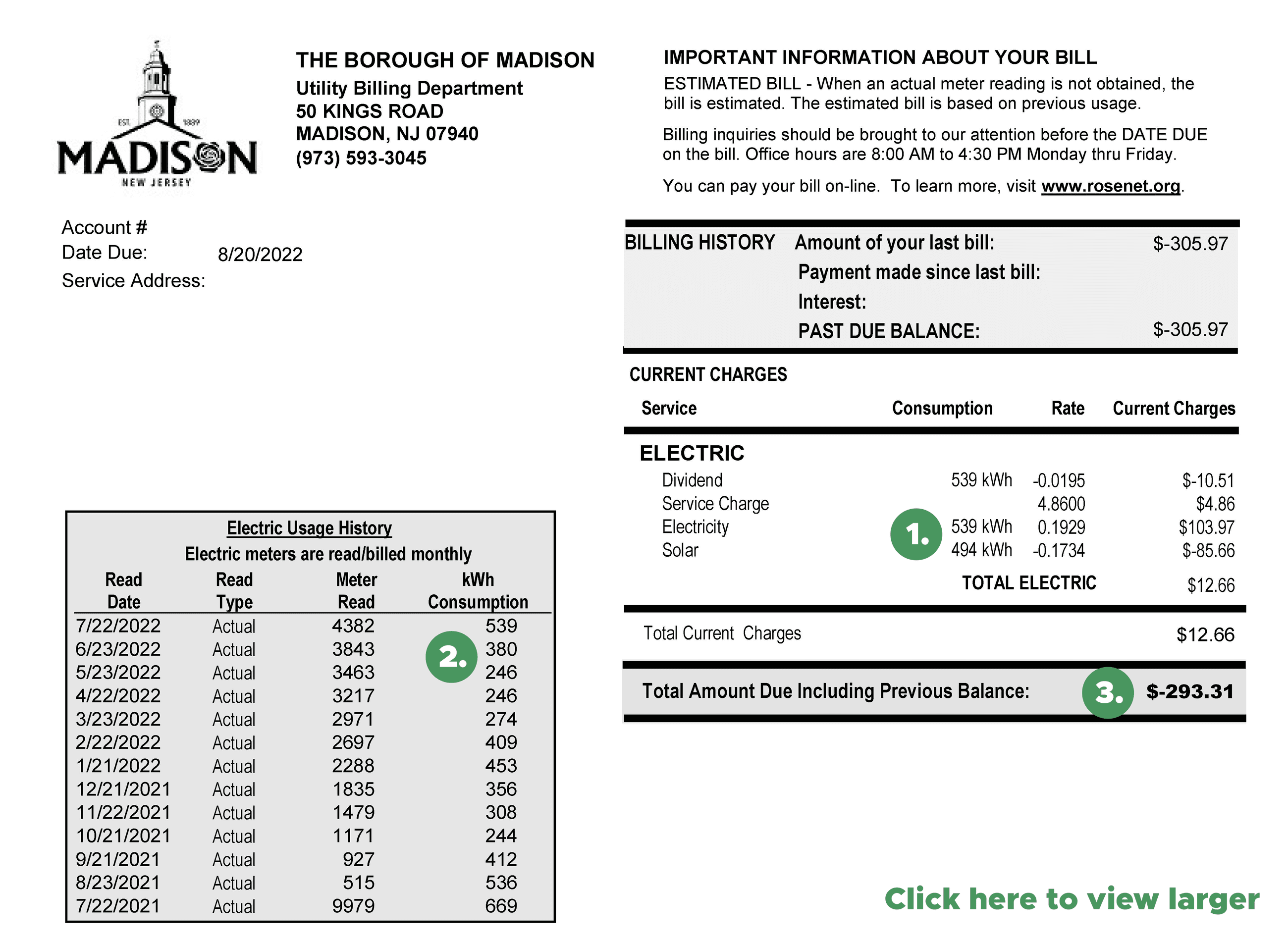 This utility bill is for an actual residence (2200 sq.ft. 5 bedroom split-level). At the time of this bill, the residence has had a 7.9 kW solar PV rooftop system for 12 months. In that time the solar panels generated 9.6 MWh of electricity. (As stated above, this value is not on the bill and only available from the solar system or the contractor.) The bill is for July. (1) It shows that in that month 539 kWh was supplied by the grid to the home while the solar system supplied 494 kWh back to the grid.

The 11% return calculated above is roughly equivalent to a 9-year payback. However, according to a survey by Zillow, a solar PV system raises the resale value of a home by ~ 4%. For a $500,000 home, this returns almost all the original investment when the house is sold. Thus a payback period is not necessarily the right analysis; your solar PV system adds value to your home at the same time as it generates savings for you. 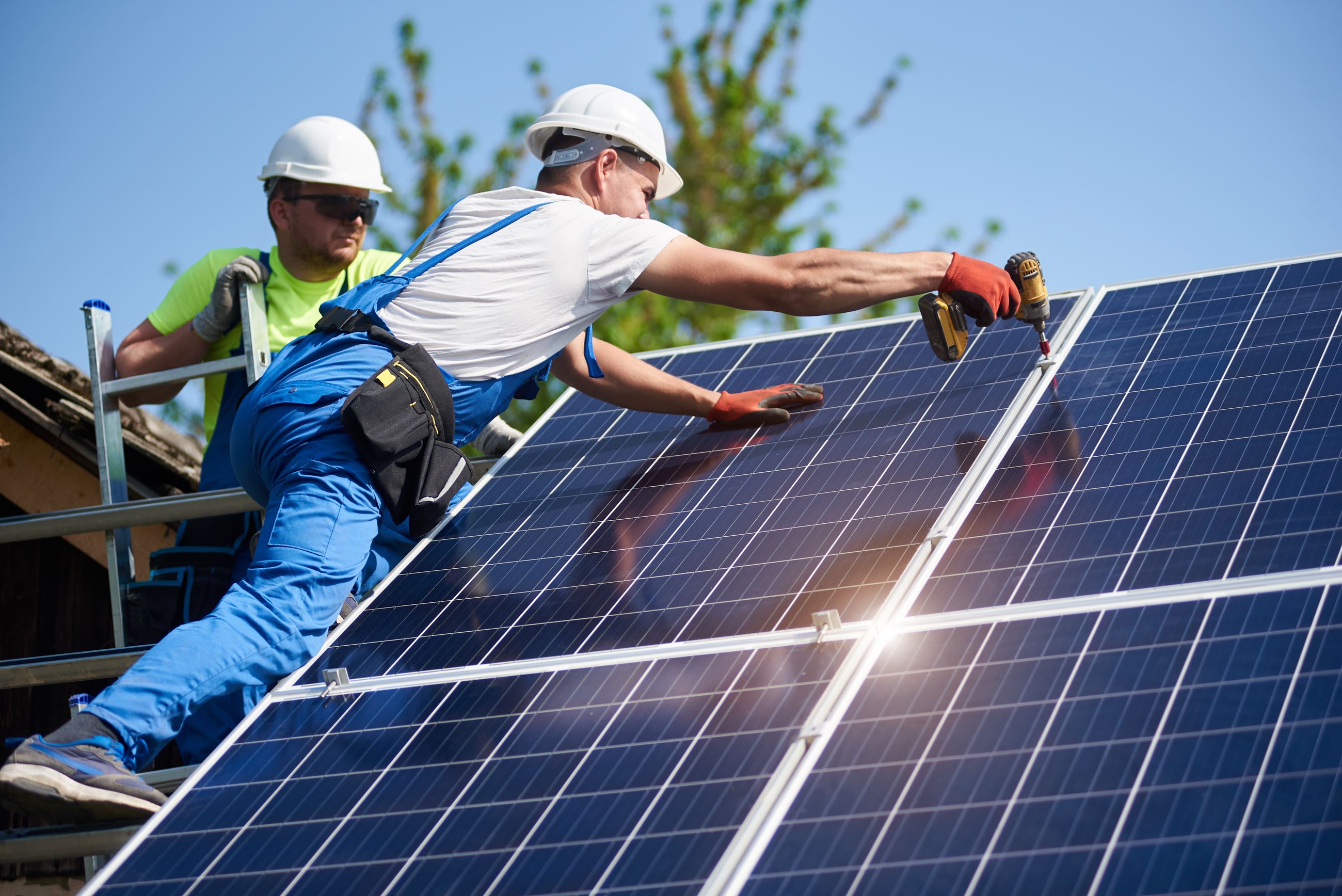 Once you decide to install a solar energy system, here are some resources to help find a solar contractor (or two) to assess your home’s potential and provide a quote.

Finally, the Borough of Madison cannot recommend any particular installer. However, below are listed those installers that have completed two or more residential systems in Madison.

This solar energy website is aimed at the most common type of solar energy system, photo-voltaic (PV) panels used to directly generate electricity. However, there are several options, alternate types of systems, and emerging technologies that one should be aware of. Battery storage systems are becoming more common in Madison. The others listed below are not often found in Madison today, but with advancing technology may become more common in the future.

We can’t provide complete descriptions of these options here, but they may be worth discussing with your installer.

Storage Batteries are becoming increasingly more popular. There are several different ways you can use a battery storage system:

Solar Water Heaters use the sun’s energy to heat household water either directly or via an intermediate heat transfer fluid that is plumbed to a heat exchanger where it heats the water. These units generate no electricity (but see Hybrid Solar units, below). Some solar water heaters are configured to heat swimming pool water. 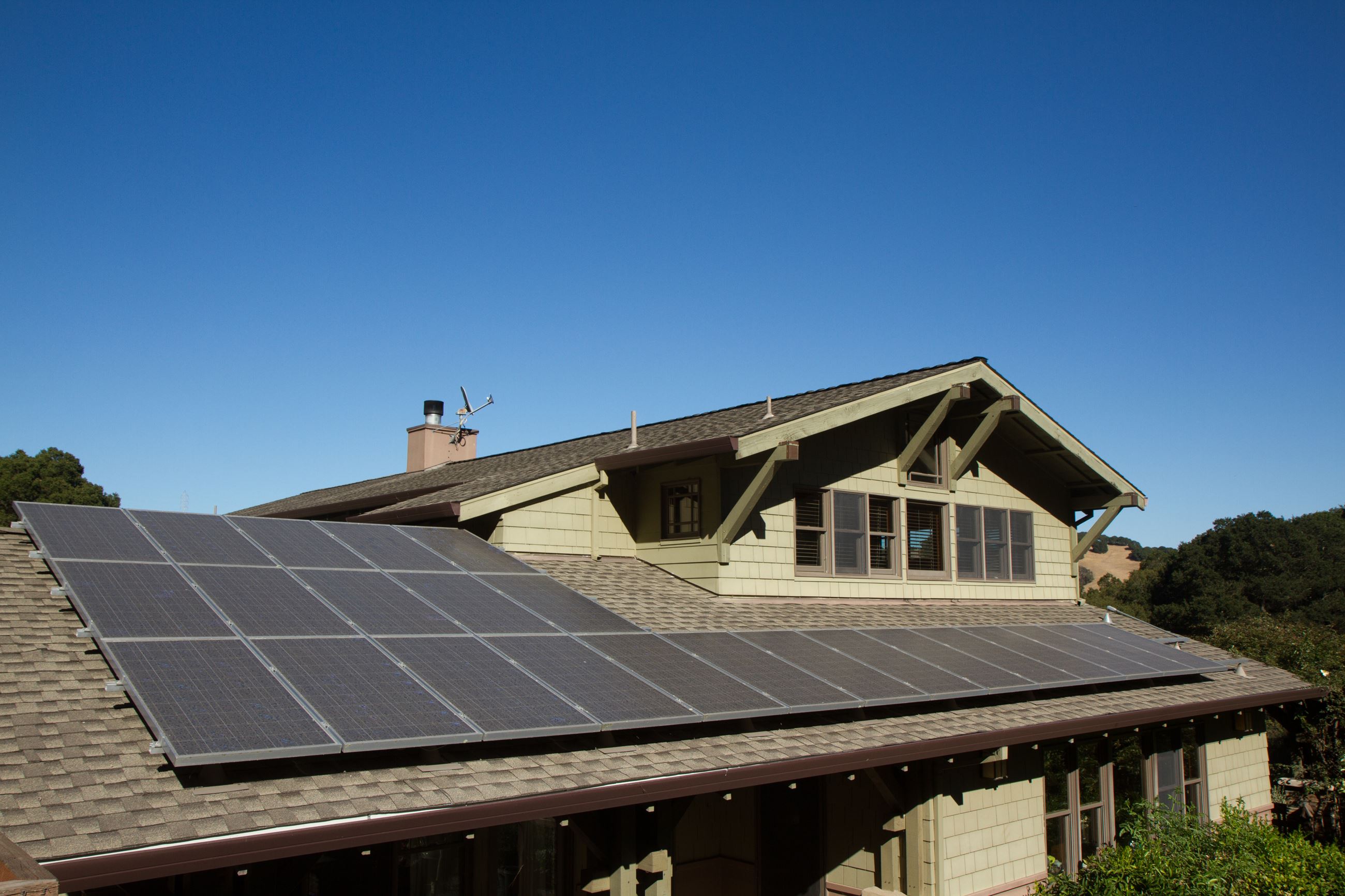 If you are going to install a solar or any type of self generation system, there are specific steps that need to be followed prior to installation, we ask that the following steps be taken to ensure a safe and reliable installation. Usually your installer will complete many of these steps; confirm that with the installer when you discuss your project.

Note: On July 9, 2012, the Madison Borough Council amended the Borough Code on the matter of net metering. Review Ordinance 13-2012. Please note the Net Metering Year now runs from April to March with “cash-out” rebates being mailed in April (if you have requested a “cash-out”). See the web-page on “understanding your bill” for details.

Download and complete Application for Solar System. Provide two sets of plans and specifications of the proposed system, signed and sealed by a Professional Engineer licensed in the State of New Jersey. These plans must include a single line electrical diagram showing all protective schemes, with the outside Solar Array Disconnect clearly labeled. Please return the completed application, 2 sets of plans, and a check for $500 to the Madison Electric Department for system review by Madison’s consulting Electrical Engineer. NOTE: If the plans are rejected during the Engineering review process and must be revised and resubmitted, a $250.00 resubmittal fee will be required. Madison does require an outside disconnect accessible to utility workers. The disconnect will allow for the solar generation system to be disconnected during emergency situations.

Upon approval by the Borough’s Electric Consulting Engineer, customer must then apply for installation permits at the Construction Code Office.

Upon project completion and all final inspections from the construction office, a written interconnection agreement must be entered into with the Borough of Madison prior to energizing the system. Download and complete the Interconnection Application/ Agreement.

Most web-sites introducing solar energy don’t cover some technical basics that can help you understand the sizing and performance of a PV system. Let’s try to remedy that with a little basic physics!

A photovoltaic (PV) cell captures some of the energy in sunlight and converts that to direct current (DC) electricity. Each panel is a collection of cells. PV systems include electrical inverters that convert the DC power into AC power compatible with your electrical supply.

What determines the power rating of a panel or a system, and then what determines how much energy that system produces in a year?

If the sun were straight overhead and there was no atmosphere in the way and you could capture all the power of the sun falling on a square meter area you would have 1380 watts of power (this is known as the Solar Constant). The earth’s atmosphere reduces this by ~20% and we thus collect ~ 1100 watts on our one square meter at the earth’s surface.

There are several technologies for PV panels. They go by names such as poly-crystalline, mono-crystalline and thin film and have different efficiencies and costs. The efficiencies typically range between 15% and 23% with monocrystalline silicon at the top of that range. A 23% efficient panel of 1 square meter would thus produce about 250 watts of power if the sun was directly overhead on a clear and cloudless day. This is how the power rating of a panel is calculated. A typical panel today is 1.66 square meters and is rated at 1.66 x 250 ~ 415 watts

To accurately estimate the annual production from our 1 sq meter, 250 watt panel in New Jersey all these factors need to be considered. This is usually done with software your installer has. However, if we seek a rough estimate for an average system in New Jersey, the Bureau of Public Utilities uses a factor of 1200 instead of the 8760 we used previously. With this factor our 1 sq. meter 250 watt panel will produce 0.3 MWh of energy in a year.

Finally there typically is a 10-15% reduction due to the efficiency of the DC-to-AC inverters.