Information regarding the Diversion Request can be found here.

In 1975, the N.J. Supreme Court held that municipalities may not pass zoning ordinances which exclude low and moderate income families. Since that decision, every municipality in New Jersey has had to provide a number of 'affordable housing' units. There have been several attempts to refine the process of determining the number of affordable housing units each municipality must provide.

The obligation to provide a realistic opportunity for affordable housing stems all the way back to the Mt. Laurel decisions of 1975 and 1983. Those decisions declare that municipal land use regulations which prevent affordable housing opportunities for lower and middle income families are unconstitutional and ordered all New Jersey municipalities to plan, zone for, and take affirmative actions to provide realistic opportunities for their “fair share” of the region’s need for affordable housing for low and moderate-income people. The decision to transfer the authority to the courts enabled many developers throughout the State to file for intervenor status, effectively giving the developer a “seat at the table” with the municipality in court. The premise of the intervenor is that as a developer they have the land and resources to provide the municipality an opportunity to meet its affordable housing obligation.

In March of 2015, the New Jersey Supreme Court declared the Council on Affordable Housing (COAH) failing and transferred jurisdiction from COAH to New Jersey trial courts in order to adjudicate municipal compliance with their affordable housing obligations. The decision permitted municipalities to file Declaratory Judgment Actions (DJ Actions) with trial courts to seek approval of their Affordable Housing Plans, or risk being sued by a developer.  As required, the Borough submitted a Declaratory Judgment to the courts by the prescribed deadline.

On December 6, 2016, members of Clarke Canton Hintz, an architectural firm that specializes in planning affordable housing obligations, made a presentation to a joint meeting of the Madison Borough Council and the Madison Planning Board describing the current determination process.

The court has appointed a Special Master and a Regional Numbers Master to assist the parties with a resolution of the issues.

Why is Madison in Court?
Fair Share Housing Center (FSHC) is a statewide affordable housing advocacy group that sued the state of New Jersey claiming that the state was not doing its job in regards to affordable housing. In March 2015, the New Jersey Supreme Court ruled in favor of FSHC and agreed that the state agency in charge of affordable housing (COAH) was failing and not fulfilling their legal obligations. The Supreme Court transferred the issue the NJ Trial Courts. This allowed FSHC to sue every town in the state and that is exactly what they did. Since that time, our options have been to negotiate a settlement with FSHC or go through a lengthy and expensive legal process and court trial that would result in an unknown outcome.

What about other towns?
Some towns have reached settlements, and others are just getting started.

When will this get resolved?
This is a lengthy process and we want to make sure we negotiate what is best for Madison. We have been working with FSHC and the courts to negotiate a settlement since 2015. Once complete, a public meeting will be scheduled to review the outcome.

What is taking so long?
Madison is working towards the best solution for Madison. This process is lengthy as it includes multiple meetings in court with FSHC and the judge. We will have a public meeting to discuss the issue right after an agreement has been reached.

Where is Madison’s current Affordable Housing?
Madison already has a number of affordable housing units that are spread out throughout the borough. Here is a list of current locations and units: 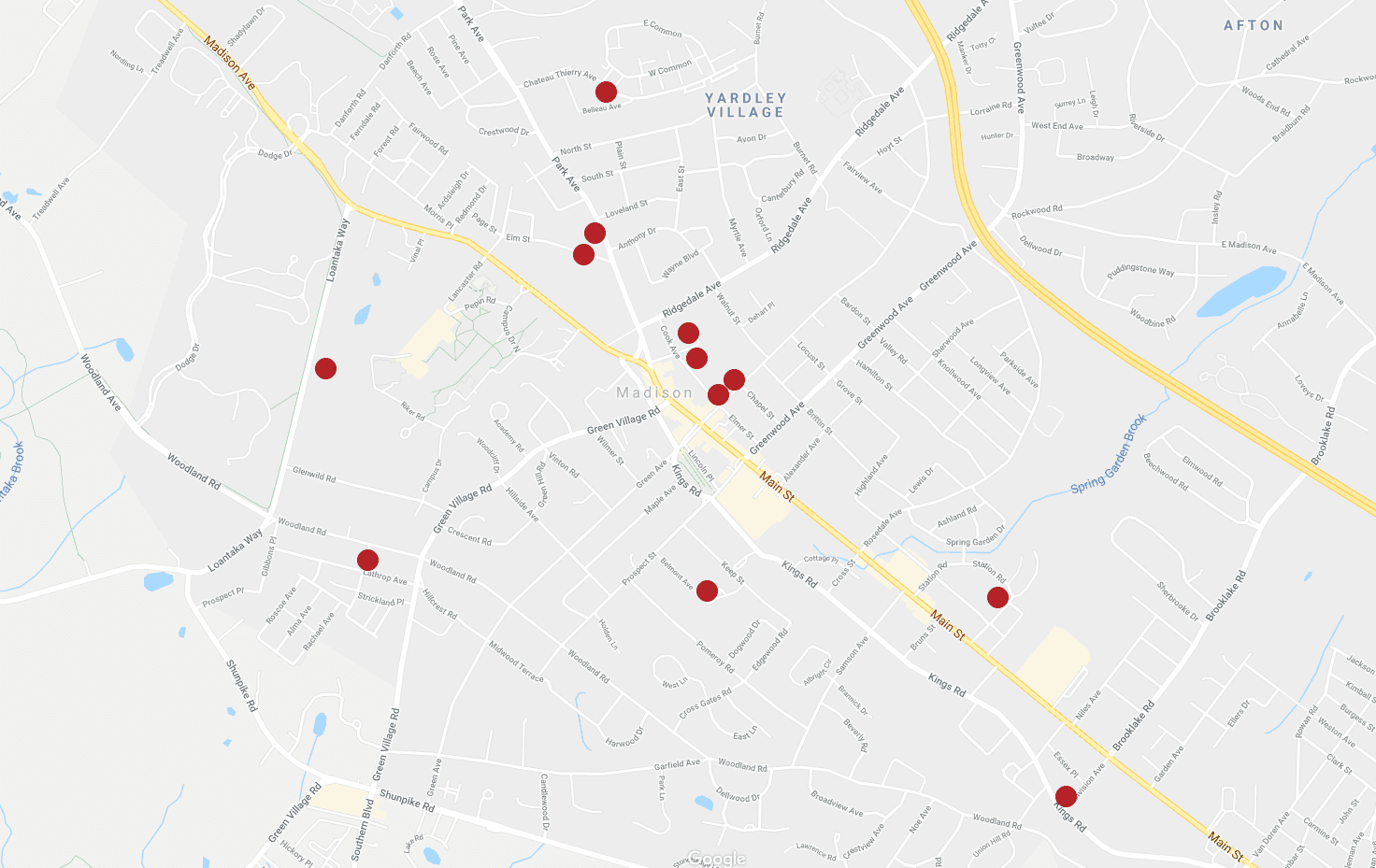 What happens if we don’t negotiate in good faith and/or settle?
Builders could ignore our zoning laws and build large developments in town. Picture “The Hills” in Bedminster being developed in Madison, or the new residential development at the corner of Park Avenue and Columbia Turnpike (formerly Honeywell). This is our biggest concern. We must reach a settlement with FSHC to protect Madison from over development. In legal terms, we would lose our immunity to builder’s remedy lawsuits.

What’s the rush?
This process began in August of 2015 when Madison had their initial Case Management Conference (CMC) before then-Judge Hansbury. Since we are in litigation, we have not been able to publicly disclose details, but have been working towards the best case for Madison for close to four years.

The Borough of Madison is has held its Final Fairness and Compliance Hearing. This hearing was conducted via Zoom only, in compliance with New Jersey Courts. Information can be found here. Note that the Court adjourned the April 22nd hearing to May 27, 2021 at 1:30 p.m.

A Special Joint Session and Public Hearing of the Mayor and Council and Planning Board was held on Wednesday, May 26, 2021 at 7:30 p.m. virtually to consider an amendment to the Housing Element & Fair Share Plan.

The Adopted 2021 Third Round Housing Element & Fair Share Plan can be found here.

Exhibits for the Compliance Hearing can be found here.

The proposed construction schedule can be found here.

A Fact Sheet related to the litigation & settlement efforts can be viewed here.

The HEFSP, which was adopted by the planning board and endorsed by the Mayor & Council all on May 26, 2021 can be viewed here.

The document which includes all of the final appendices can be viewed here.

Interested parties are invited to submit comments to Madison, with a copy to Fair Share Housing Center, regarding whether any site no longer presents a realistic opportunity and should be replaced and whether the mechanisms to meet unmet need should be revised or supplemented. Any interested party may by motion request a hearing before the court regarding these issues.

What is a Special Master?

"A person who will help the municipality select from the innumerable combinations of actions that could satisfy the constitutional obligation, the one that gives appropriate weight to the many conflicting interests involved." - Chief Justice Robert Wilentz, 1983

What are the roles of a Special Master?